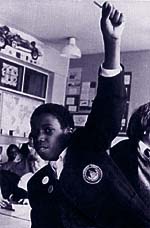 “I am convinced that, despite all the race-based marginalisation, the ability to mix, blend, change, radicalise, reinvent and serve up something distinctive in a hostile urban environment is at the core of “being Black in Britain” – Prof Thomas L Blair

#BlackLondonFutures is a timely reminder. We live in an age that needs bold, innovative and creative thinking. The heirs to Black London’s abolitionist, civil rights, cultural and Black Power movements of the 20th Century are gearing up for the 21st Century.

Though separated by generations, young professionals and retirees have the talents for community development so crucial to people of the inner city, I call Black London.

Clearly, Many Black Millennials will find new ways of self- and collective expression. Some will be soft power diplomats forging coalitions and caucuses. Others will focus on local issues and working through local leaders.

In the more fluid and porous divisions of the 21st century, Black people will move upwards from the most precarious underclass.

Some Black celebrities and multi-millionaires in sports, fashion, pop culture, crime, business, and politics, may even be accepted in the highest rank of elites.

To better #BlackLondonFutures, academics must forsake the ivy towers and link high theory to popular forces. Public intellectuals and parliamentarians must learn to work together for the public good. Urban designers and planners will have to prove they can renew and build public housing without catastrophic effects. Moreover, political and community leaders, workers and youth must rebrand “being Black” as a positive force for change for all.

These restless currents will relieve the terrors of disadvantage that beset many Black Londoners. Moreover, thrusting upwards in the urban society and economy, and forward for race equality and justice can broaden opportunities for many people.

High quality contributions and comment posts are welcome – new, engaging, and the snappier the better.